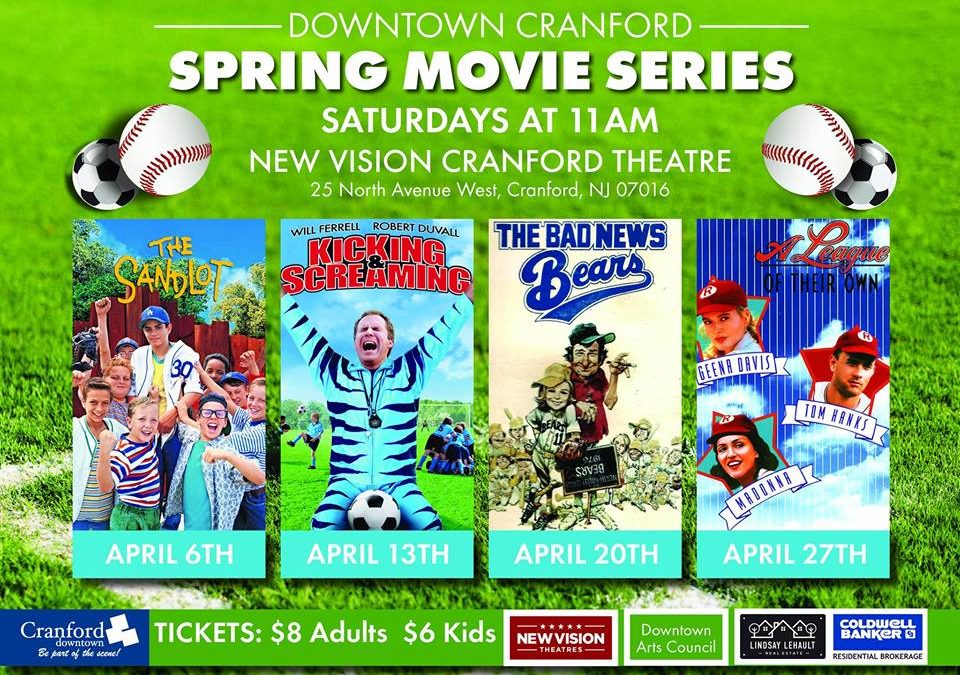 New Vision Theatres and Downtown Cranford invite you to join us every Saturday in April at 11 a.m. for our Spring Movie Series.

Tickets are $8 for Adults and $ for children.

APRIL 6 – THE SANDLOT
In the summer of 1962, a new kid in town is taken under the wing of a young baseball prodigy and his rowdy team, resulting in many adventures.
APRIL 13 – KICKING AND SCREAMING
Family man Phil Weston, a lifelong victim of his father’s competitive nature, takes on the coaching duties of a kids’ soccer team, and soon finds that he’s also taking on his father’s dysfunctional way of relating.
APRIL 20 – THE BAD NEWS BEARS
An aging, down-on-his-luck ex-minor leaguer coaches a team of misfits in an ultra-competitive California little league.
APRIL 27 – LEAGUE OF THEIR OWN
Two sisters join the first female professional baseball league and struggle to help it succeed amidst their own growing rivalry.

Thank you also to That Suburban Life from Lindsay Lehault Real Estate for sponsoring the series!

The Roselle Park Police Department has announced that it is hosting National Night Out on Tuesday, August 3rd from 6-9pm. The National Night Out is an event that promotes police-community partnerships and neighborhood camaraderie. Chief[...]
Aug
5
Thu
2021
10:00 am Storytime with the Police & Fire...
Storytime with the Police & Fire...
Aug 5 @ 10:00 am